Home » How Military Disney Tips Grew From an Idea to a Website That Has Served Over 6.8 Million US Military Members Veterans and Their Families

I have had a long association with both the U. S. Military and Disney Theme Parks.

My mission is to offer you the best advice that I can specific to the U.S. military community to plan for, save money on, and enjoy your Disney vacation!

What makes Military Disney Tips different than all the other Disney sites?

The History of Military Disney Tips

My fascination with Walt Disney World started at a young age. In grade school my family started taking annual spring vacations to Florida to visit family. That first year (1971) we visited the Walt Disney World Welcome Center. WDW wouldn’t open untill that fall, but they had lots of info about the soon to open theme park, plus lots of souvenirs. Each year afterwards, until I graduated high school, we’d spend a day at WDW during our spring vacation.

After high school I enlisted in the Air Force and spent four years on active duty. After four years stationed in Texas I became a single parent. Having a one year old and being a Strategic Air Command Aircraft Crew Chief pulling nuclear alert (living on base in the alert facility 2 or 3 days at a time) did not work well as you can imagine. So I chose to get out and relocate to Orlando, FL where my parents had moved to. Not wanting to end my relationship with the Air Force I switched to the Air Force Reserve. I was a reservist for the remainder of my career in various capacities, some part time (while I worked at WDW) but all the rest was in various full time capacities.

During the three years I spent in Orlando (85-88) I actually worked full time at Walt Disney World! I ordered food for one of the restaurants in the Magic Kingdom Theme Park (the Tomorrowland Terrace, now called Cosmic Rays Starlight Cafe). That was a very interesting and fun time!

In 1989 I left Disney to pursue a great opportunity to fly with the Reserves, which eventually lead to full time Reserve duty in Ohio. All through the nineties my family and I would visit our relatives in Florida and we’d always make time for a one-day visit to WDW. With the knowledge I had gained while working there I was very good at making our visits fun, efficient, and memorable.

Steve inflight at “the office”

This was before the explosion of the internet (and Disney sites) and the only people who knew secrets and little known facts were Disney cast members and their friends. These were our golden years of touring the parks!

In 2000 we decided that we’d never really had a true “family vacation” we had always visited relatives on our vacations and squeezed in a 1-day WDW day-trip. So we decided to live it up. A whole week at Disney World! I did a huge amount of research and the vacation was a great success. We had lots of special experiences that trip! Since then we’ve been so lucky to have returned for many multi-day trips. We’ve stayed at many of the resorts (Disney and others) and tried many of the wonderful restaurants on property.

After the 2000 vacation, people at the squadron and around base started asking for my advice on their Disney vacations. I had become the local pro. I always enjoyed helping them plan their vacations.

In 2007 we transfered back to Florida (just five and a quarter hours from Disney) but I still had people in Ohio calling to ask for help with their vacations. I thought that if I’m still getting calls and e-mails for advice I must have found my calling.

I decided that it was time for me to start sharing my passion for Disney on the web with the community that I’ve been a part of for so long, the Military/DoD community.

I started this site in early 2008 and it has been a huge success. I work on it part-time and really enjoy doing so.

In 2016 we actually moved back to Ohio for a great civil service job and to be near our kids and now grand daughters. So now I get to commute to WDW via plane instead of car.

In 2021 I also retired from civil service and switched over to being a contractor for the Air Force.

In a few years though this side job will be my only full-time one! 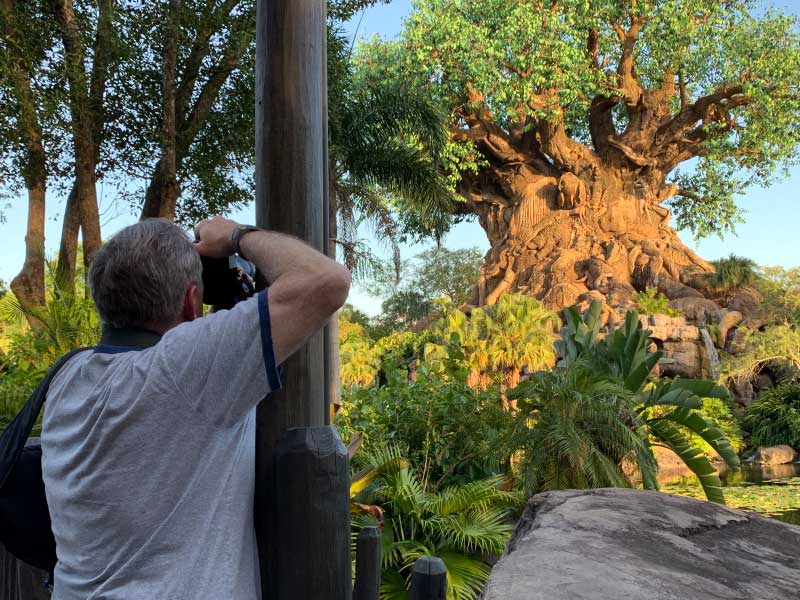 My goal for this site is to help you!

Please support the operation of this site by sending me a tip. I really appreciate your support if you can!

You can subscribe to my email newsletter to get website updates and news by clicking this link.

MDT Celebrated Over 10 Years of Assisting Military Families with Their Disney Planning in 2018!

In 2021 I branched out to Universal Orlando, which I’d covered only peripherally prior: