There has been a lot of talk surrounding Cinderella Castle in Walt Disney World since the start of the 50th Anniversary Celebration. 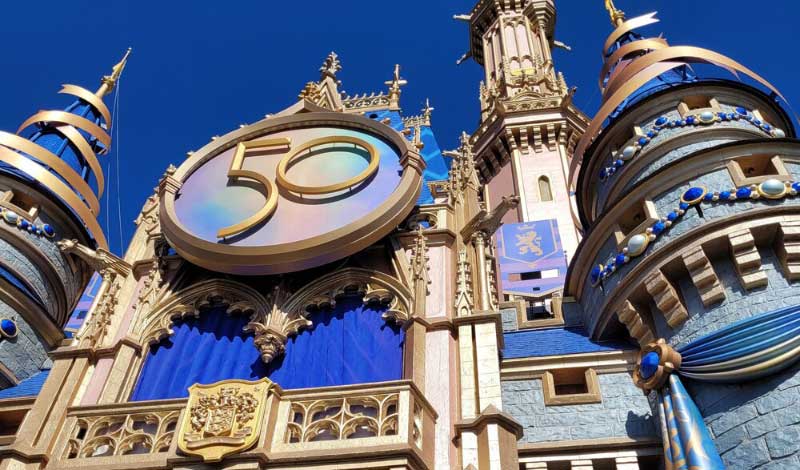 Whatever your thoughts are on the color change and the addition of the golden ribbons and 50th Anniversary banners, Cinderella Castle has changed a few times over the years.

Why Have a Castle? 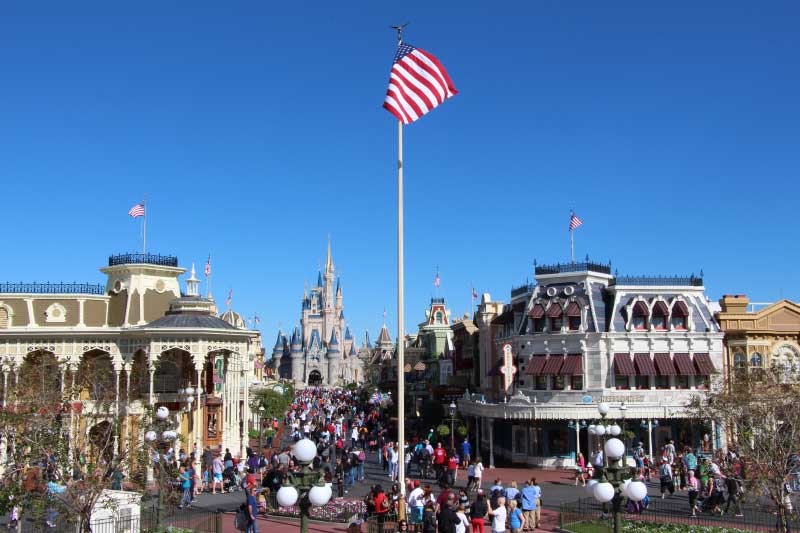 Cinderella Castle was what Walt Disney called the “weenie.” The weenie is the thing that draws in the crowds, and every park has a weenie. Think about it – After you walk through the tunnel leading into the Magic Kingdom, there is only one direction to go… Straight towards the castle and the hub.

Cinderella Castle is modeled after 11th and 13th century Romanian structures, French fortresses, and gothic spires to bring to life the richness and romance of the princess stories. The overall castle construction took around 18 months to complete. 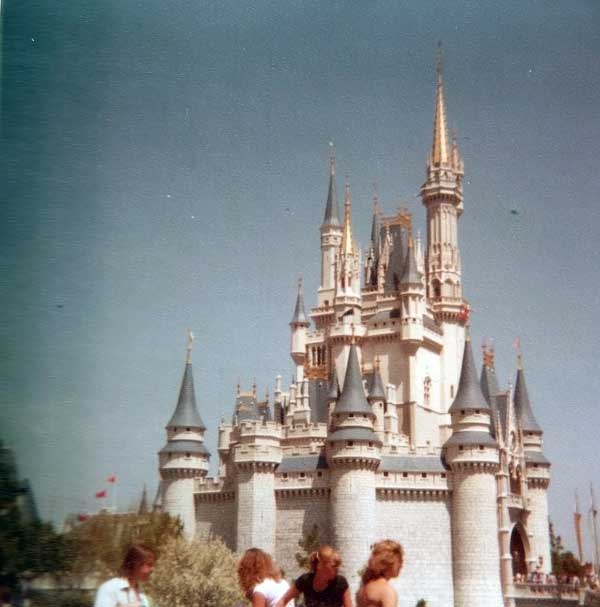 Cinderella Castle in the 1970s

Disney Imagineers had their jobs cut out for them on this project! While most castles are made from bricks and stone, Cinderella Castle was made from concrete, fiberglass, steel, and cement. Traditional castles of Europe never had to deal with intense heat and storms like that of Florida! 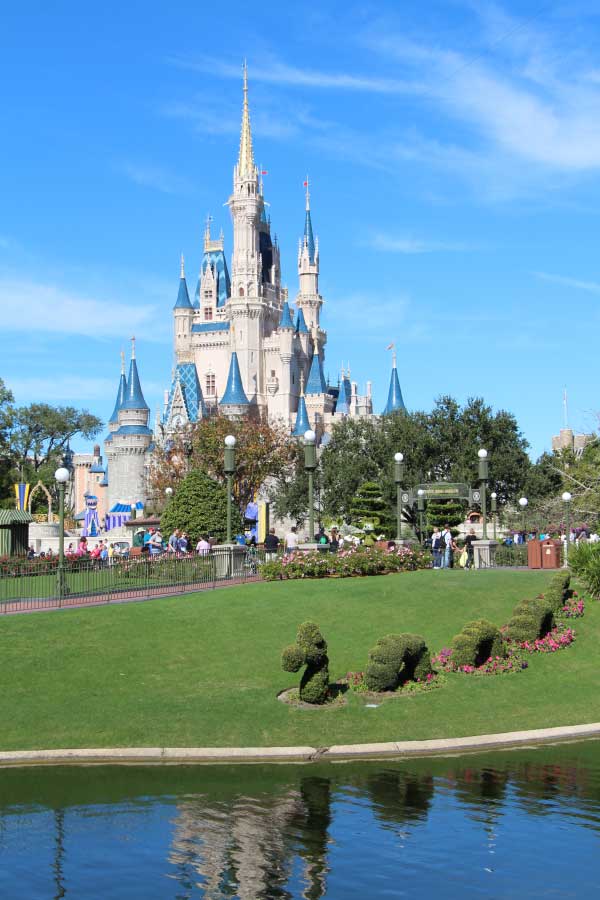 The imagineers also had to play with your eyes on Cinderella Castle. You see, that humongous castle with spires that reach high into the sky is only 189 feet tall. Imagineers used forced perspective and creative architecture to create the illusion of height. Why all of the illusions? Why not just make a really tall castle? The Federal Aviation Association (FAA) dictates that any structure over 200 feet tall must have a blinking red light at the top. The whole point of the Magic Kingdom was to take you out of reality, so a blinking red light would disrupt the story. In fact, no structure in any of the Disney parks surpasses 200 ft for the same reason. The tree of life is 145 feet tall, Hollywood Tower Hotel (Tower of Terror) is 199 feet tall, and Spaceship Earth in EPCOT is 180 feet tall. 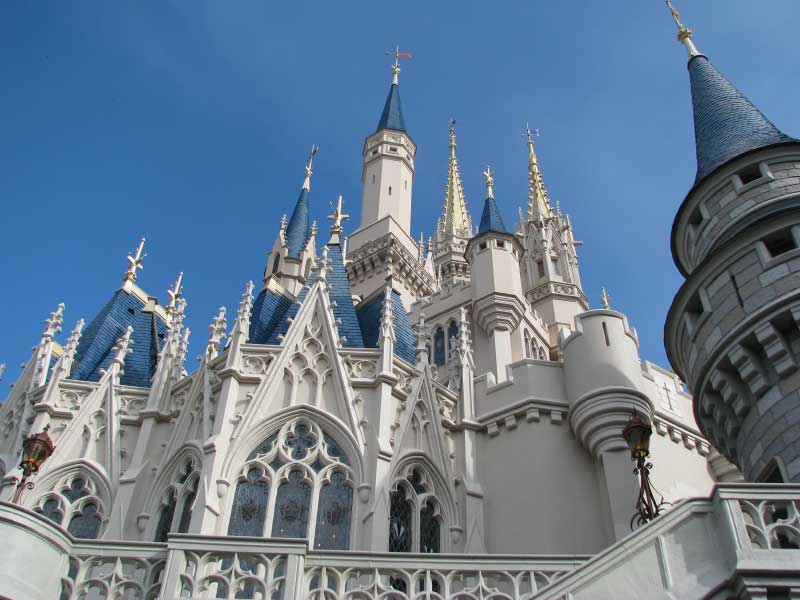 Think about that for a second… Spaceship Earth and Cinderella Castle are almost the same height. Those Imagineers are magicians!

Changes Through the Years 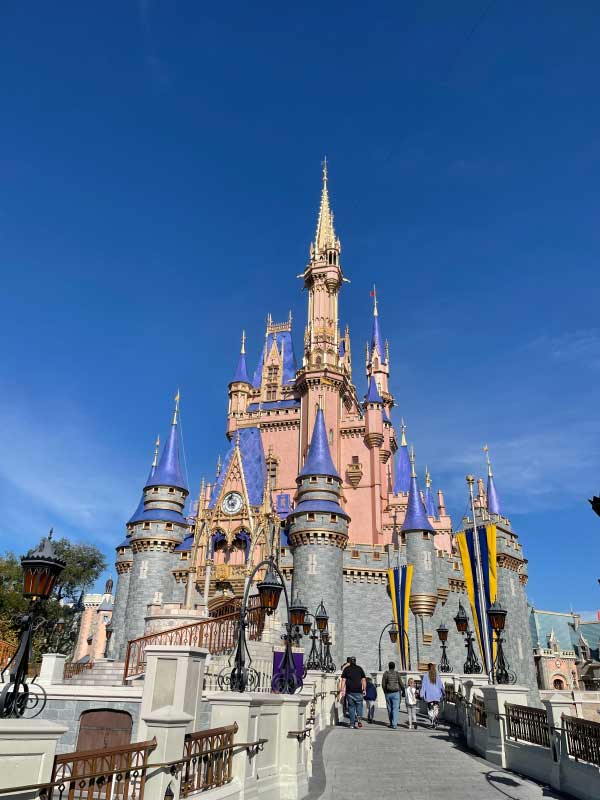 The original castle was gray and light blue with traces of gold. The colors have not changed much through the years, however the castle has been used to celebrate different milestones for Disney. The most famous temporary castle change was in 1996 when Walt Disney World was celebrating their 25th Anniversary. What better way to celebrate than with cake! In this case, a very large cake. 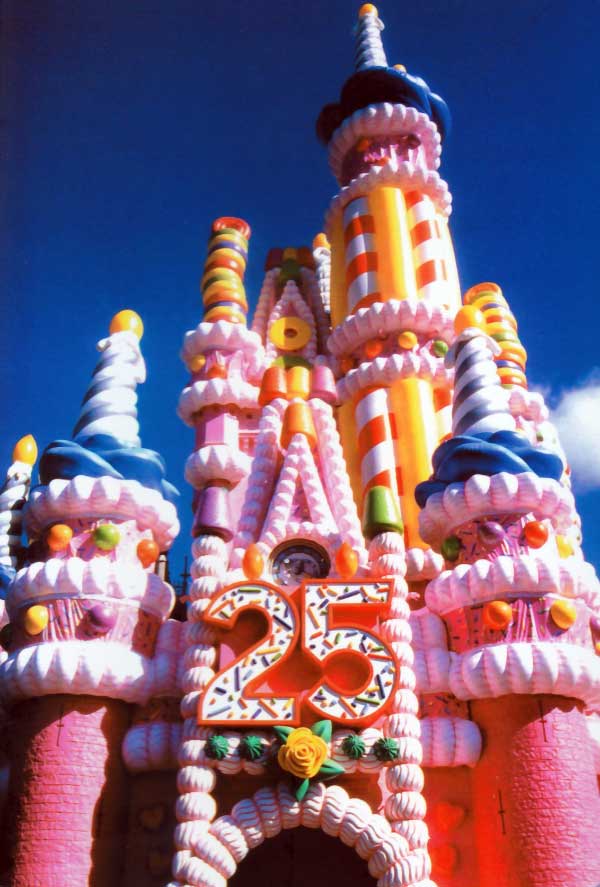 Cinderella Castle dressed up in the 25th Anniversary Cake Overlay

With a bit of paint and a whole lot of magic, Cinderella Castle was transformed into a child’s dream cake. The castle was painted in multiple shades of pink and decorated with icing and 50 gumballs, 30 lollipops, 4 Life Savers, 12 gum drops, 16 red candy hearts, and 16 green candy stars. It was a cake weighing 40 million pounds. 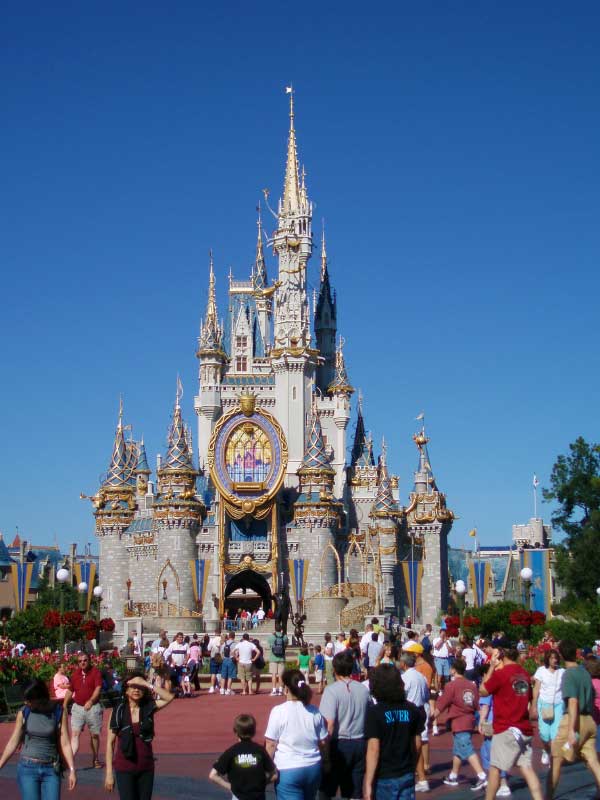 Cinderella Castle with its Makeover for Disneyland 50th Anniversary

Another castle makeover was in 2005, when Disneyland turned 50 and the anniversary was celebrated by every Disney theme park around the world. At Disney World Cinderella Castle was covered with gold spirals and character statues. 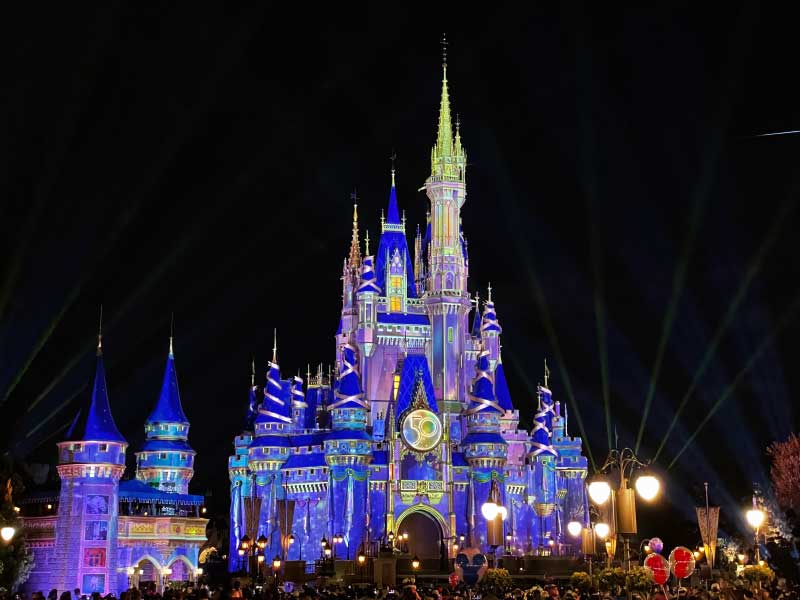 While the castle has changed very little, the technology has grown leaps and bounds. Every night the Magic Kingdom shoots fireworks over the castle, but wait, there’s more! With the magical technology of projection mapping, Disney is able to create stories and images onto the castle to coincide with the music and fireworks creating the ultimate experience. 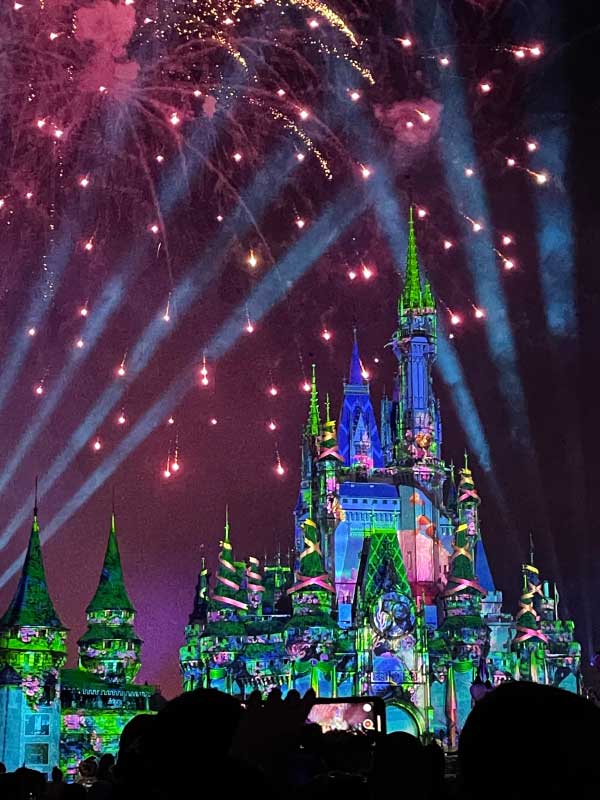 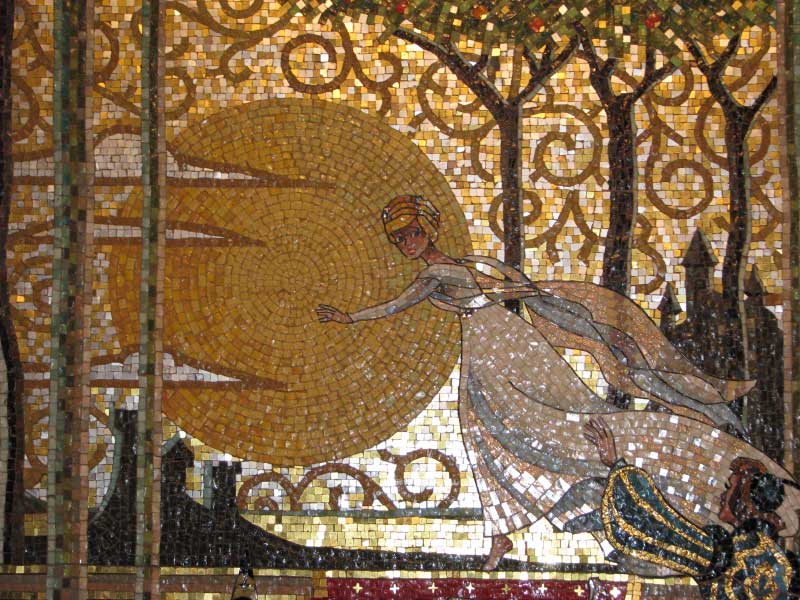 Come and see the story within. If you enter the castle through the backside in Fantasyland you will see the story of Cinderella told through beautiful mosaics. These 5 mosaics measure 15 feet high and 10 feet wide based on paintings by famous Disney Imagineer Dorothea Redmond.

More About That Mosaic 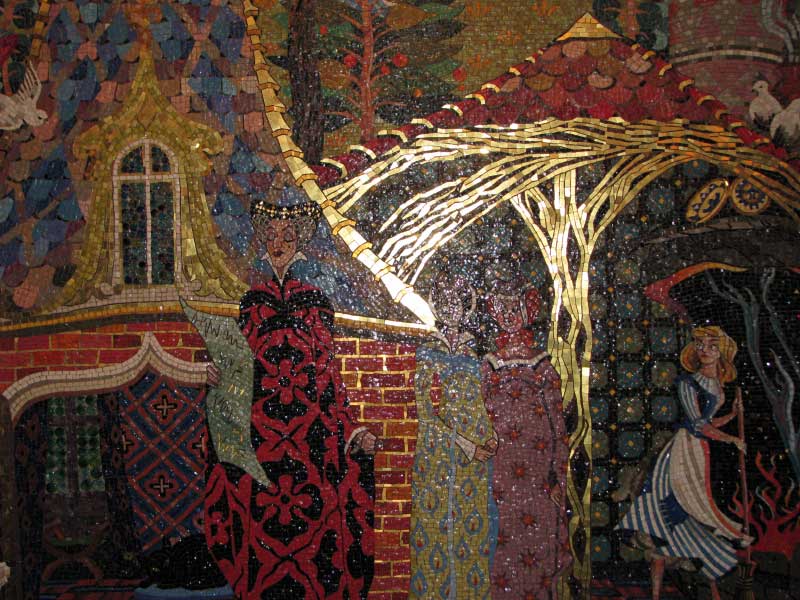 The mosaics were created and built by Artisan Hanns-Joachim Scharff, along with his family. Prior to being an accomplished artist, Scharff was known as a Master Interrogator for the Luftwaffe during the Second World War. He was also said to be the most effective interrogator in all of Nazi Germany, with the “kill them with kindness” technique. After the war, he was influential in improving interrogation techniques for the United States. 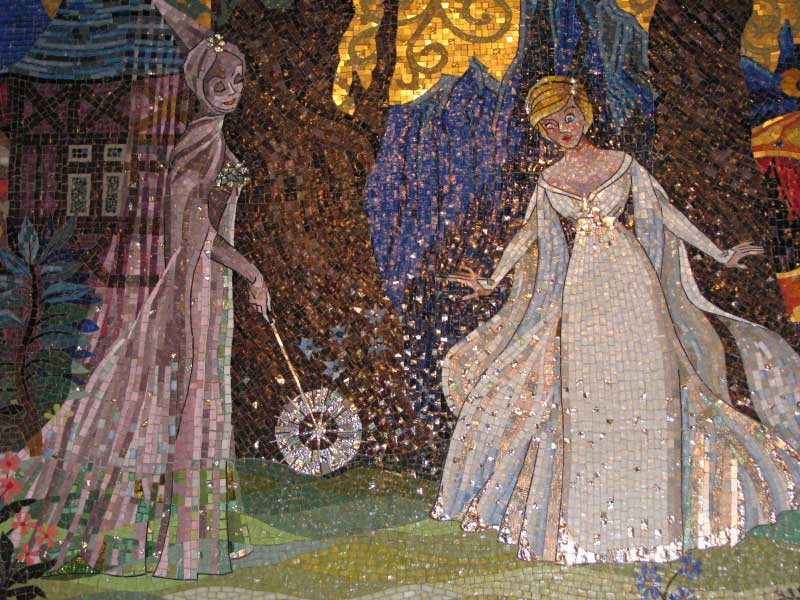 After immigrating to the United States Scharff returned to artistry, a passion that began in his youth. He quickly gained success and notoriety around the country for his mosaics, but none are more known than the Cinderella murals inside of Cinderella Castle. 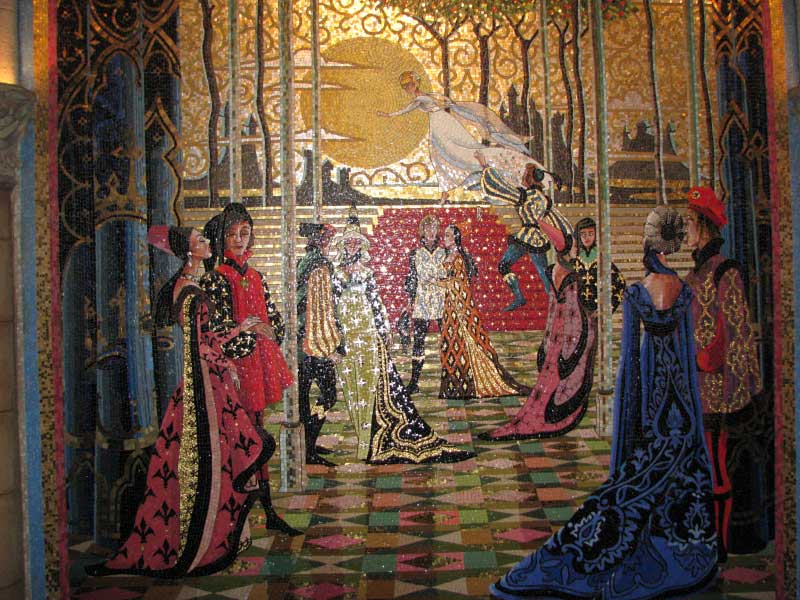 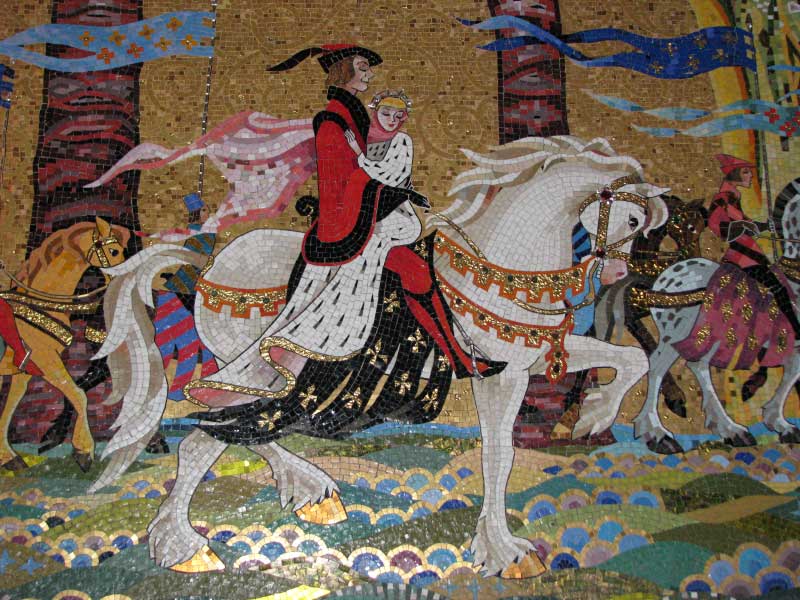 You Can Eat in the Castle! 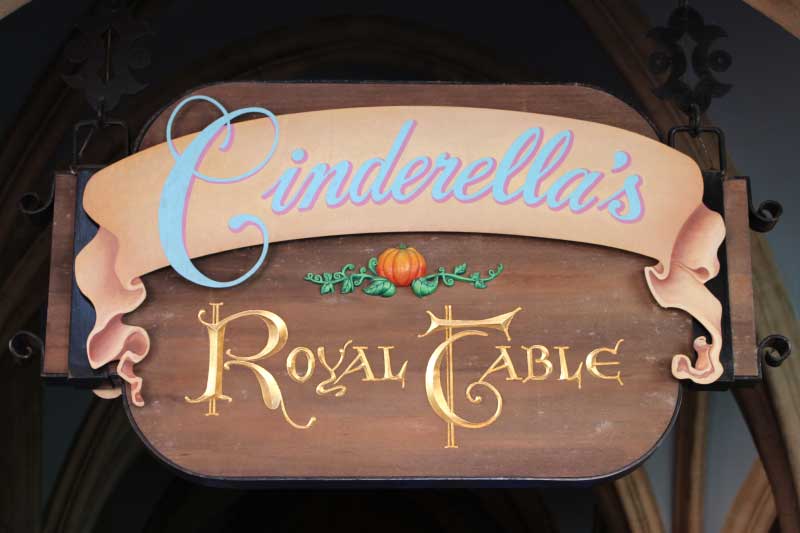 Part of the opening day restaurants in 1971 was a restaurant that was inside the castle. What we now call Cinderella’s Royal Table was originally King Stefan’s Royal Banquet Hall. Are you scratching your head? You should be since Sleeping Beauty’s father was hosting a banquet in Cinderella Castle… 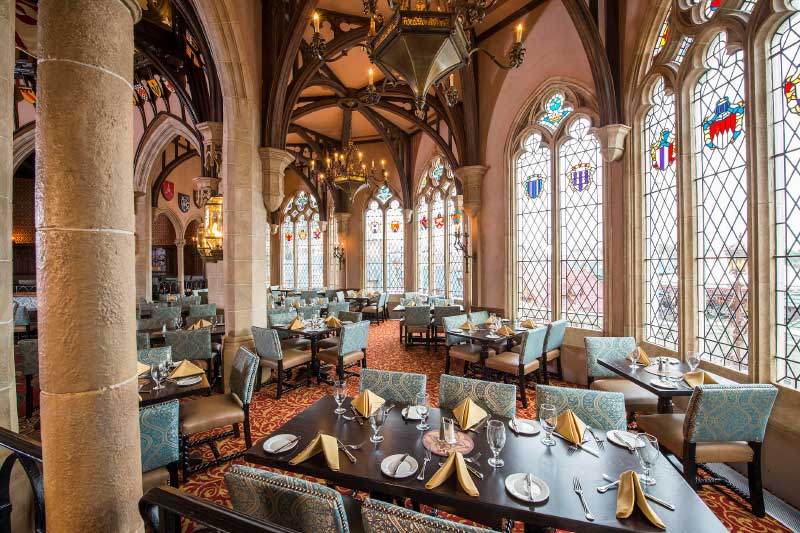 Present day, Cinderella’s Royal Table is one of the hottest dining reservations in all of Walt Disney World. Traditionally, this is a full princess dining experience inside the castle where little boys and girls can have a fancy meal fit for royalty. As of Summer 2022, Cinderella is the only princess at the restaurant, and she is only doing photo ops at the front of the restaurant. Disney announced in June 2022 that all of the character dining is slowly but surely returning to normal!

You Can…Sleep in the Castle?

There is a luxurious suite built in the top towers of Cinderella Castle. It is rich and luxe with warm colors and opulent furnishings. It is the only way to sleep in the Disney Parks. And it also cannot be bought. No amount of money can buy a night in the Cinderella Suite. This room is the ultimate Pixie Dust. Through the years, Disney has used the Cinderella Suite as a prize for sweepstakes, but most often it is given to Make A Wish families. 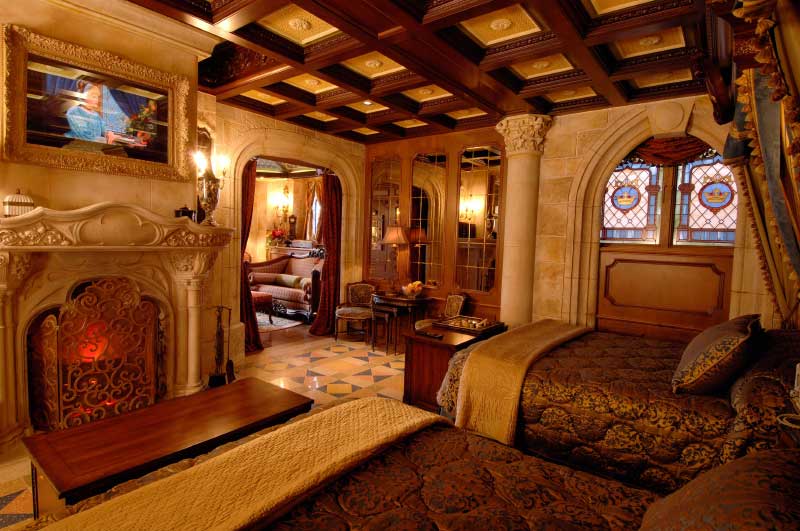 You may not be able to buy a night to sleep in Cinderella’s Suite, but you can pay to see it! If you purchase the Keys to the Kingdom VIP Experience you will be able to take a tour through the suite so you can at least see it. For only $114 per person you can explore the Cinderella Suite, plus all of the secrets of the Magic Kingdom! 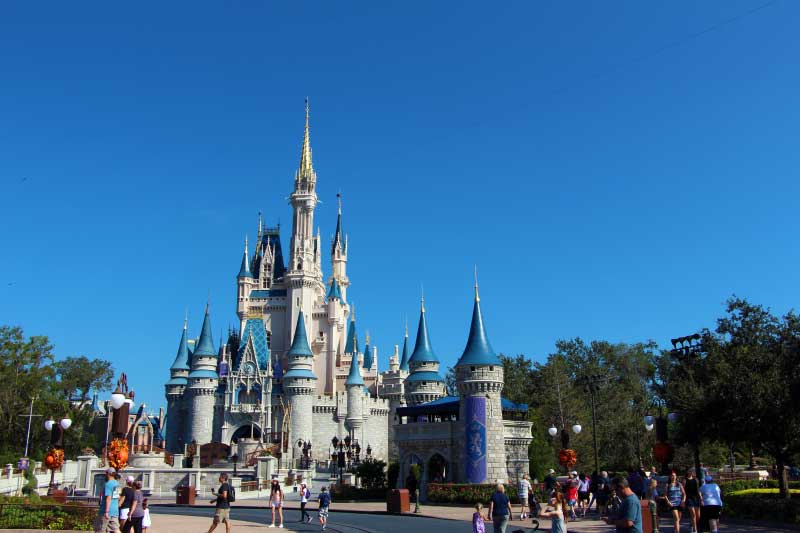 Tell us your thoughts in the Comment Section below on the new paint job on Cinderella Castle! Love it or hate it?