Get ready for a punny good time on the rivers of the world with the Jungle Cruise in Adventureland in Magic Kingdom.

Your Skipper will entertain you with the world’s best dad jokes as you check out the 8th Wonder of the World…. *Drumroll please* The backside of water! You will also see hippos, baby elephants, monkeys, natives and more! What is awesome about the Jungle Cruise is that it will never be the same ride twice. Of course, the animatronics don’t change, (yes, these are animatronics, more on that later!), but Skipper to Skipper and ride to ride, the jokes change.

Some of Our Favorite Jungle Cruise Skipper Jokes

–       While pointing to a rock : “This here is sandstone, but most people take it for granite. It’s one of our boulder attractions.”
–       “Everyone watch out for Ginger. Ginger snaps. She’s a tough cookie. I know it’s a crumby joke but I’m going to milk it for all it’s worth.”
–       “Please watch your head as you leave the boat. If you can’t watch your head, then watch your mouth. This is a family attraction.”
–       “Any kids misbehaving will be taken to ‘it’s a small world’ and forced to sing in the attraction.”
–       “I get paid for the number of people I take out, not the number I bring back.” 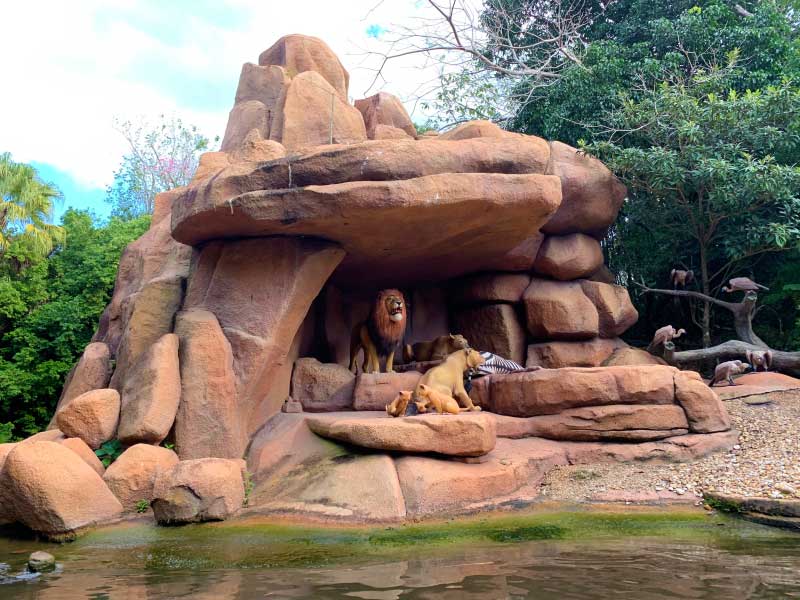 Jungle Cruise is a classic family boat ride where puns are king, not just from the Skippers, but also from the time you enter the queue! Read everything on the walls and listen to the overhead announcements. Imagineers never do anything just because!

You’re going to need lots to read and do because Jungle Cruise always has a long line. The average wait time is around 60 minutes for the Jungle Cruise! This is due to the fact that despite having multiple boats, they can’t accommodate many people at one time. Plus, lines are full of dads looking to fill their joke tank… Kidding aside, Jungle Cruise is a ride that has only increased in popularity over the years. 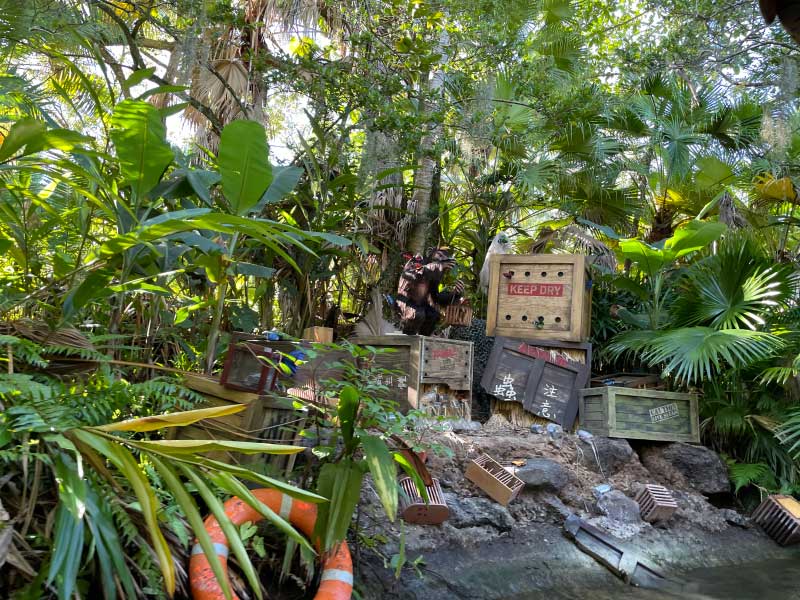 If Jungle Cruise is high on your priority list, we highly recommend using Genie+ to snag a Lightning Lane. If you don’t plan on getting Genie+, then rope dropping Jungle Cruise is a must to avoid a long line that is almost completely exposed to the sun.

There is a significant step down to get into the boat, just like a … well, a boat. There are things to hold on to, and other guests are often helpful as well. After that step, seating is easy breezy bench seats, so people of all ages, shapes, and sizes will be comfortable.

Are you planning a Walt Disney World vacation during Christmas time? For Disney, Christmas is from November 1 – December 30. The World Famous Jungle Cruise changes it up a bit and becomes the Jingle Cruise!

That’s right. It’s jingle time. The skippers are ready to sleigh with Christmas themed puns to help you celebrate the most punderful time of the year. Plus, there are fun Christmas decorations strewn through the attraction for an extra touch!

After Walt’s trips to South America in the 40’s he became infatuated with nature and exotic animals. The Walt Disney Company started making animal documentaries as Walt wanted to share knowledge of these foreign lands with America, and entertain them at the same time.

While building Disneyland in California, Walt longed to have a boat ride attraction that replicated his trips along the Amazon with real animals along the way. Yes, real animals! Walt wanted real hippos in the middle of Adventureland! Imagineers convinced Walt that they could still educate people using animatronic animals… And it’s a lot less dangerous. A lot less poop, too. 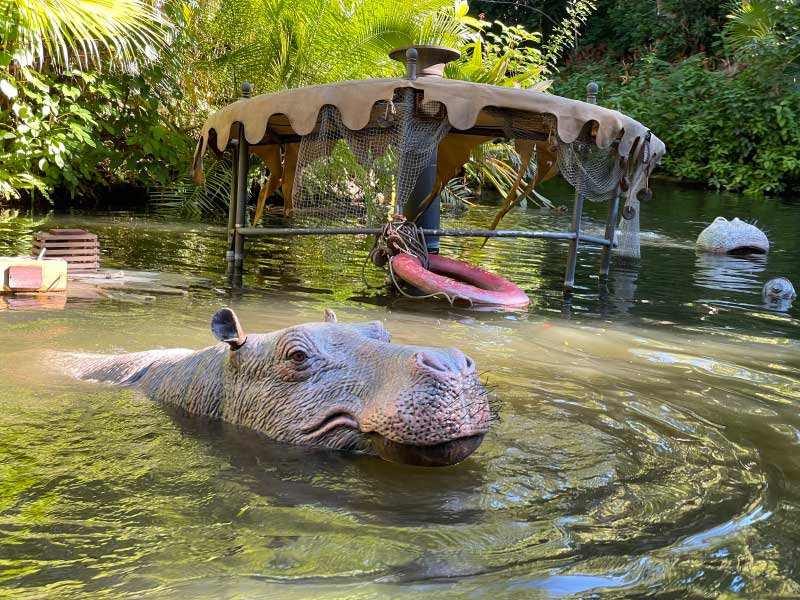 The original Jungle Cruise looked very similar to the one we know today, and also had a Skipper as their guide sharing animal facts and facts on the rain forest. The Jungle Cruise was an educational attraction. Then one day, Walt was walking through Adventureland and as he walked by, he heard laughter. He was confused because what was funny about the Amazon.

Turns out that the Skippers would go off script and make bad dad jokes out of boredom. Saying the same 8 minute script every 15 minutes for 8 hours is a bit maddening. Walt, himself, went on this off-script ride and noticed that guests really took to the new comical twist. Changes were made to the Jungle Cruise to allow the Skippers freedom in their scripts to add in jokes, puns, and fun in with their facts. The rest, they say, is history. 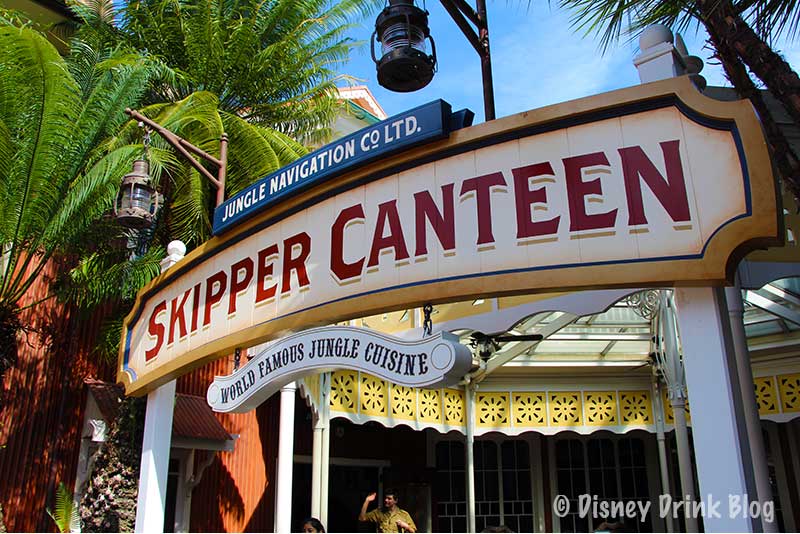 Can’t get enough of the Jungle Cruise, their Skippers, or the S.E.A.?  Just across the way in Adventureland is a restaurant owned by the Jungle Cruise parent company, commonly shortened to just Skipper Canteen.

This restaurant is run by Skippers, so expect some puntastic jokes, and was created for serious members of the S.E.A. (Society of Explorers and Adventurers). Be sure to ask about the secret book case… 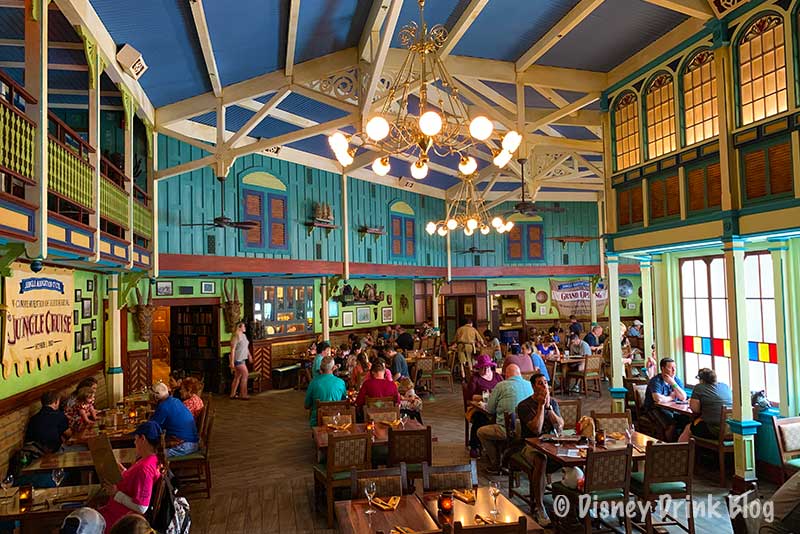 The food here is just as adventurous as your trip around the Amazon. There are flavor fusions from all over the world, and adventurous eaters are sure to find something to sink their teeth into. Don’t fret if you are picky, they have tame items as well.

Reservations are not hard to get at this Magic Kingdom restaurant, but as always we recommend you book your reservations 60 days out. In the Magic Kingdom and wanting to check it out, ask the hostess about the Walk-up Waitlist. Chances are, you can snag a last minute table. 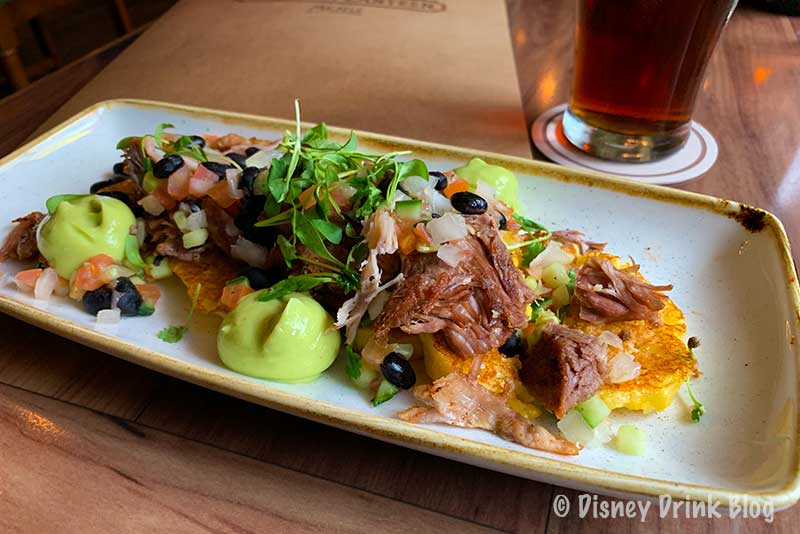 Check out their full menu here

Can’t get enough of the Jungle Cruise? In 2022, Disney+ released The Jungle Cruise full-length movie starring Dwayne “The Rock” Johnson! The movie is based completely around the Disney parks attraction including bad jokes, and of course, the infamous backside of water!

Jungle Cruise isn’t the first movie based off of a ride. The box office favorite Pirates of the Caribbean franchise was a runaway success! Funny enough, it was so successful that many people believe that the ride was made because of the movie and not the other way around. Disney has also made a few movies about Haunted Mansion and one called Tomorrowland. There was a Space Mountain movie in the works, but during the pandemic, Disney canceled the project.

See all our Theme Park Pages: