One of the ticket add-ons that Disney’s theme parks offer is the Park Hopper option. In this post we’ll discuss, what Park Hopping is, the tickets that offer it, how to do it, and why. What is Park Hopping?

Basically Park Hopping is using one theme park ticket to visit two (or multiple) theme parks in one day.

For example with a ticket that has the Park Hopper option, at Walt Disney World you might go to the Magic Kingdom in the morning, then later in the day perhaps after a mid-day break go to Animal Kingdom. Perhaps you might even go to a third park for the end of day fireworks show. I’ve hit all 4 WDW parks in one day.

You can go back to a park that you have already attended earlier in the day if you desire as well. This is true of all Disney tickets even those that do not have the Park Hopper option.

In order to Park Hop you need to have a ticket or pass that allows it.

There are quite a few ticket options that allow Park Hopping. For some this is included in their higher price, for others it is available as an add-on.

Disney Armed Forces Salute Tickets – All Disney Armed Forces Salute Tickets include the Park Hopping option in their price, These highly discounted tickets are usually the best deal for military families. The Salute tickets come with the Park Hopper Option, and at WDW the Hopper Plus Option. The Hopper allows Park Hopping, the Plus option allows access to all of the Plus options available at Walt Disney World. For each option you add, the price of the ticket goes up.

Read more about the Plus Option

Regular Military Discounted Disney Tickets – These tickets are identical to the tickets sold to the general public that are slightly discounted by Base Ticket offices. These regular tickets come in Base (non-Hopper), Hopper, and at WDW Hopper Plus. The Base is a one park per day ticket, the Hopper allows Park Hopping, the Plus option allows access to all of the Plus options available at Walt Disney World. For each option you add the price of the ticket goes up.

Most Disney Park Annual Passes – All Disney Annual/Seasonal Passes (except individual park passes such as the Epcot After 5 Pass) include Park Hopping. How to Park Hop

Once you’ve accomplished what you’d like to do in the first park of the day, simply leave and head to the next park.

In year’s past you had to get a hand stamp when exiting the first park in order to reenter another. But this is long gone due to technology.

When Disney World reopened at the end of the summer in 2020 after being closed a good chunk of the year, Park Hopping was not allowed. As of 1 January 2021 Park Hopping has returned, but with some differences from what you’ll see elsewhere in this post.

“Park Hopping Time” is currently set at 2 p.m. at Walt Disney World and 1 p.m. at Disneyland. Though Disney says they can change the time as needed. I am not aware of this ever happening.

You can check which Walt Disney World parks are available to Park Hop each day by calling (407) 560-5000 as the time approaches.

At Disney World You can actually get in a little earlier than 2 in many situations!

In the pic above the red line shows where they set up a temporary barrier to keep the 15 people waiting to park hop at 2 p.m. away from the area between Security (the left awning ) and the entrance (the right awning) so there won’t be congestion. The white arrows show the path to the restrooms and then through security to the gate (to be used at 1:47 (no earlier).

At WDW’s Hollywood Studios and Epcot, setting the Park Hopping time at 2 p.m. and setting the afternoon Virtual Queue attempt time to 1 p.m. prevents Park Hoppers from riding the most popular rides in these parks (Rise of the Resistance and Remy when virtual queues are in effect) when park hopping!

Disney World begins running Park Hopping Buses between the parks at 1:45 p.m. They will sometimes check that you have a ticket or pass that allows Park Hopping before you board (they did this early on but have slacked off). 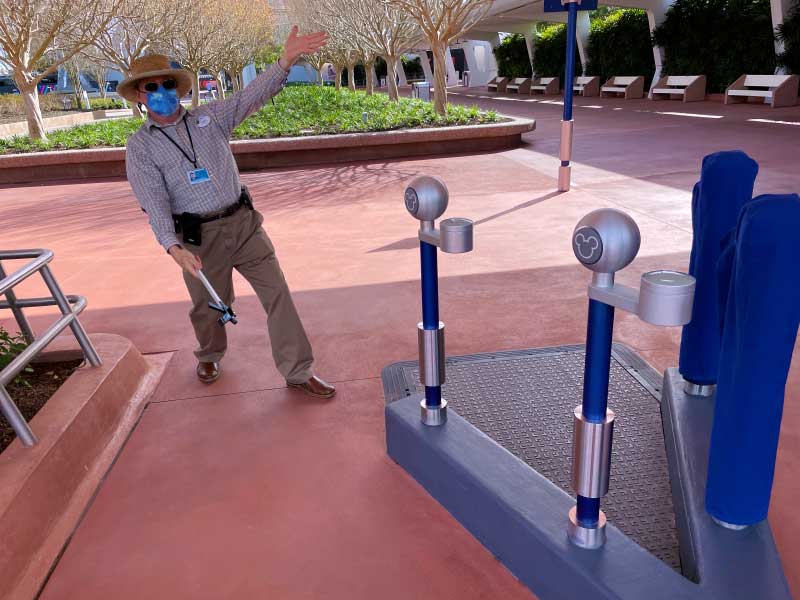 At Disneyland they do not allow entry until 1 p.m. exactly.

The Finer Points of Park Hopping

Now let’s talk about actually getting between the parks when you want to Park Hop. There are several ways to do this, in order of ease they are:

There are 6 possible combinations of parks you would travel between (in either direction) when Park Hopping directly from Park to Park. These are:

Note: You might decide to detour elsewhere between parks, for instance to your room for a mid-day break, Disney Springs for a meal, or somewhere else. Transport would then be direct from that location to the next park by the best means. Disney buses do not run between Disney Springs and the parks!

Two of these offer the easiest commute they are:

For the other combos: Disney Transportation – Hopping between Epcot and Disney’s Hollywood Studios is the easiest! Just hop on the Skyliner or the Water Taxi that run between Hollywood Studios and Epcot’s International Gateway.  On the Skyliner you must change gondolas at the Caribbean Beach Station. The boats make 3 stops at the Epcot Resort Hotels on the way.

For all other transfers, you’ll use the Disney bus route between the 2 parks.

Disney has announced that their Minnie Van Service will be coming back in Summer 2022!

Minnie Van Service was discontinued after the 2020 shutdown.

In 2017 Disney World began offering a new “uber like” service called Mini Vans. These are a fleet of polka dotted (they look like Minnie’s dress) SUVs and cargo vans (with the ability to carry scooters). For about 25 dollars they will take you anywhere on property. They can seat up to six guests, and car seats are on board at no additional fee. Several larger vehicles are available and can transport up to 2 wheelchair/ECV guests.

These are a great totally safe version of Uber and Lyft for those who may not be comfortable with those options. These are driven by Walt Disney World cast members, so totally vetted and safe (though more expensive). The ride experience is far superior to the usually silent or sullen Uber/Lyft drivers,; cast members are friendly, knowledgable and talkative (if you want)! Plus the music played during the ride is Disney music themed on your destination.

Minnie Vans service all locations on WDW property. The Minnie Vans can be requested via the Lyft app (keep swiping left through ride types) or by calling 407-828-3500.

Minnie Vans operate from 6:30 am to 12:30 am and only operate on property. (there is an airport option)

Taxi, Uber, or Lyft – These options will all of course cost you, but offer a quick transfer between parks. Often they will have shorter wait times than the Disney Bus System and fairly close pick up and drop off locations.

Disney World has always had a problem at the Magic Kingdom Monorail Hotels with people parking at the hotels to avoid parking fees and going to the Magic Kingdom; those driving their own car will be given the 5th degree about why they are going to any of these 3 hotels. But this shouldn’t matter at all for ride hires! But snippy Disney Security Guards will still ask you why you are there. Just say to shop and dine, or ask your driver to drop you in the drive prior to the gate (it’s closer to the Magic Kingdom!)

Walking – If you are ambitious you can walk between Epcot and Disney’s Hollywood Studios along the same route the Water Taxis take. It is roughly a total of 1.3 miles walking along the waterway between Hollywood Studios to the Epcot Area Resorts, then the loop around the lagoon on the Boardwalk to Epcot’s International Gateway.

Driving Yourself – This involves initially parking a distance from the theme park in the morning, walking or taking the tram to the Park or TTC, then the reverse to get back to your car, traffic during the transfer to the next park and then doing it all over again.

If you do drive to your first park, you might consider leaving your car there and using one of the methods above to park hop. Much easier.

This is the least palatable option! So much so, that it is not recommended at all!

Shades of Green guests are welcome to use Disney’s transportation system for free, so do so!

There are 2 reasons to Park Hop.

The first is to avoid crowds as part of your touring strategy. The most popular parks are typically busiest on the weekends, when locals add to the vacationer attendance levels. EPCOT can get very full (and sometimes drunk/rowdy) Friday/Saturday afternoons and evenings during the annual Festivals (Food and Wine, Flower and Garden, Arts), so it can make sense to get what you want done in the first park, and then hop to another, less busy park.

The second is to have certain experiences (attractions, dining, fireworks, etc.) in different parks on the same day.

Making Disney Genie+ and Individual Paid Attraction Reservations in a park that you do not have a theme park reservation for is technically taking a chance as there is a slight potential that you could not be able to park hop do to your second park of the day due to it being at capacity.

This is a small risk as this only happens at the very busiest times.

Well, that’s about it for our primer on Park Hopping.

Over to You! Do you plan to Park Hop? Have you already tried it? Do you have any tips to share? Tell us in the comments section below!