For those who haven’t planned ahead Disney’s Parks offer a solution for your depleted devices.

With the advent of in-park WiFi and Disney smartphone apps like My Disney Experience that drain batteries quickly, recharging during your theme park days has become essential.

When your device is running low you can do one of the following:

Update October 2021 – On our most recent trip to WDW, all FuelRod locations were inoperative due to a “Network Error or Update in progress” all afternoon! We went to all locations at Disney Springs after having tried a couple in Animal Kingdom.

So what about Disney’s FuelRod Stations?

For those who find their smart phone running low on juice in the theme parks, Disney has installed FuelRod stations at various locations in their theme parks.

For those who are not familiar, FuelRods and other charging devices are essentially a small portable battery pack, which when plugged into your phone or devise acts just like a wall plug or USB connection for charging.

The key selling point of the FuelRod brand is that after the initial purchase, you can return to any station and swap out your depleted FuelRod for a charged one free of charge.

Or you can recharge your FuelRod yourself and have it ready to use within a few hours. It will be fully charged within 6 hours.

Disney FuelRod kiosks dispense these portable charging batteries for $30.00 each, which includes:

The micro-USB/USB cable that comes with the FuelRod can be used to recharge it. Simply plug the smaller micro-USB tip into the FuelRod, and the larger USB tip into your computer or any USB charging port. The LED light will change from red to green when your FuelRod is fully charged. 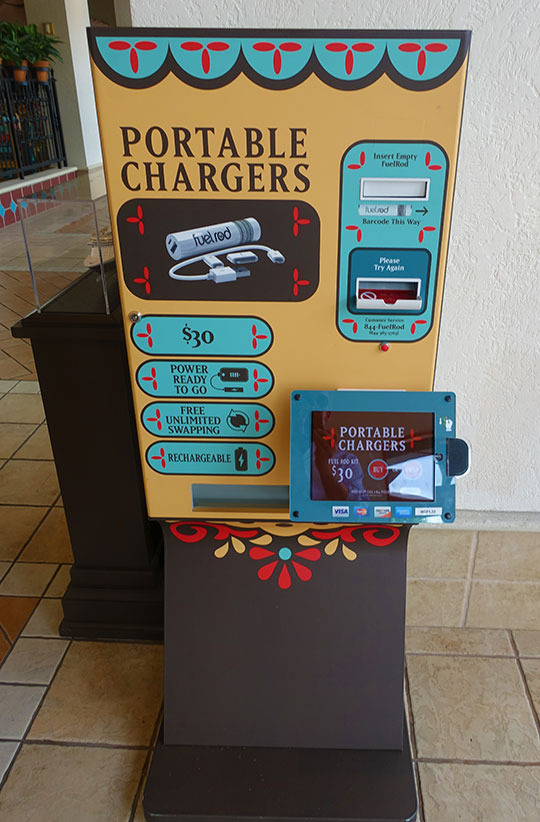 See the Disney World Site for all locations 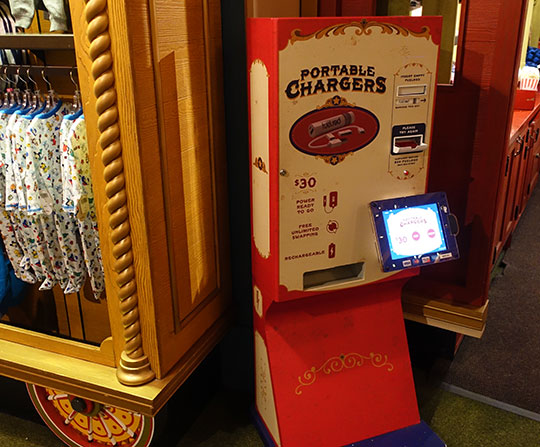 See the Disneyland site for all locations

You can purchase FuelRods ahead of time at WalMart.

Save $5 – You can buy your FuelRod ahead of time to save 5 dollars directly from fuel-rod.com, where you’ll pay $20 for the FuelRod and $5 shipping (US deliveries only).

Save $10 – You can buy your FuelRod from a dispenser just like at WDW as you pass through the Orlando International Airport, where you’ll pay $20. It’s located in Concourse A. 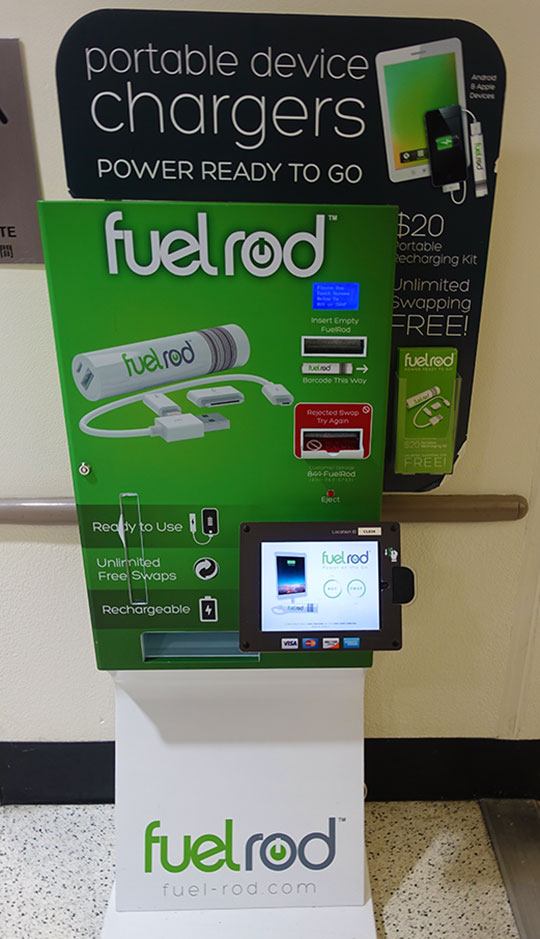 And now to discuss whether using the Disney Fuel Rod Stations is a good idea.

The only reason to use these FuelRod stations is if you totally forgot to plan ahead, are really in a power bind AND a time crunch. “

If you really need juice and can’t afford the time to sit  around with your phone plugged in to charge at a wall socket, whether just a plug somewhere or the Magic Kingdom Charging Area, then buy one of these.

But, reports indicate that these particular battery packs have a comparatively low capacity to store power, compared to readily available alternatives on Amazon. FuelRod capacity has been tested to be 2,600 mAh.

Check out these alternatives on Amazon or search for your own:

On top of that Amazon Prime members get free shipping! Be sure to do an Amazon Prime Try Before You Buy trial!

Do you find you need extra power while in the parks?

What do you use to recharge?

Are you pro FuelRod or pro purchasing your own ahead?

Let us know in the comments below!

Note: this post contains Amazon affiliate links, purchase will yield a small referral to MDT at no extra cost to you.