The resort that is Shades of Green today was originally opened at Walt Disney World as a Disney-owned resort called the Golf Resort in December 1973.

The Golf Resort was located in the middle of the Palm and Magnolia golf courses across the street from the Polynesian Village Resort. The Golf Resort was built of wood and volcanic rock in the style of a country club and featured 151 guest rooms. 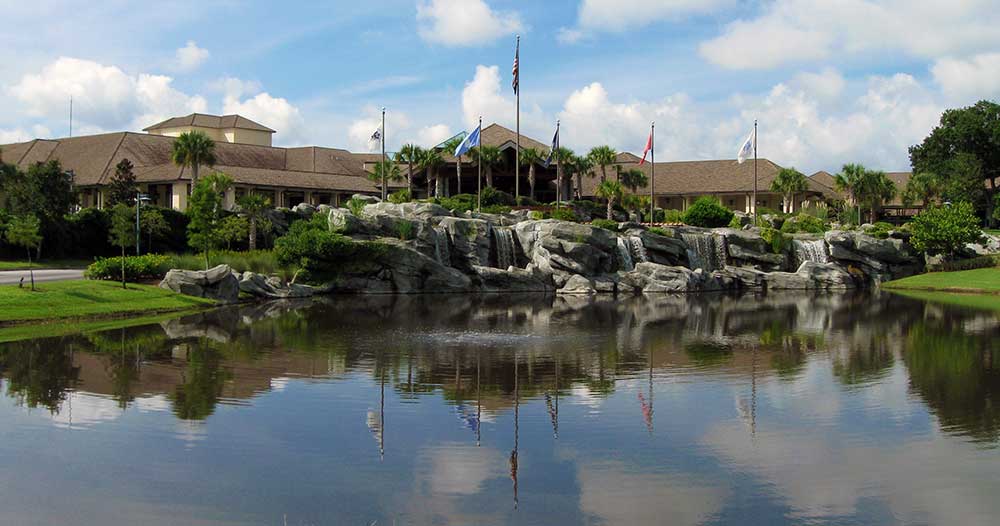 The core building of the resort was originally opened in 1971 as a two story clubhouse for the golf courses and did not actually have guest rooms. Guest wings were added to the original clubhouse in 1973 to add more guest room capacity to the WDW’s existing Contemporary and Polynesian Resorts and Fort Wilderness Campground. One of the major drawbacks to the resort was its location. The resort was not located on the monorail loop. The nearest monorail station was a quarter mile away at the Polynesian. The Golf Resort only had an occupancy rate of 60% to 75% most of the year while the Polynesian and Contemporary Resorts had an occupancy rate of almost 100%. Most travel agents and tourists did not really consider The Golf Resort to really be a “Disney” resort. The resort was expanded and renamed The Disney Inn in February 1986 to try to appeal to a wider guest base than just golfers. It received an additional 150 rooms with a new Snow White theme during that renovation. The resort was still small though for Disney standards, with only 301 rooms.

The resort described itself as having the rustic charm of a quiet country inn. Guest rooms were decorated in a bright and airy style. The sitting area had pale green paint, an oak table and chairs, along with a chandelier and a pull out couch. Transition to the Military

By the early 1990s, Army officials had decided it was time to build an Armed Forces Recreation Center in the continental United States. Orlando was the top choice in a market survey of soldiers.

During 1992 in the aftermath of Desert Storm Army MWR placed an ad in the Orlando Sentinel inquiring if anyone in the local business community would be interested in leasing a resort property to the Army. The desired number of rooms and required amenities, such as a pool, restaurant and lounge were listed.

It was decided that the offer from the Walt Disney World Company to lease the Disney Inn was the right offer.

After negotiations were completed the Shades of Green opened its doors on 1 February 1994. The Department of Defense leased the resort and the land it sits on with a 100 year lease.

There was long process for deciding what to call the new resort. The new name had to be acceptable to both Disney and MWR. At the time all branches of the military wore some form of green utility/battle dress uniform. It was decided to call the resort the Shades of Green to refer to the different shades of green in the various services uniforms thus encompassing all the services. Plus Shades sits between two of Disney’s lush green golf courses with their putting greens. It seemed the perfect name. The resort was so successful and popular that MWR decided to purchase the resort in 1996. The resort was purchased outright from Disney, for $43 million, although Disney still owns the land on which the resort sits.

Shades of Green is a self-sustaining resort, no outside/taxpayer funds are used in its operation or upkeep.

In the following years the huge popularity of Shades of Green caused it to fill to capacity often and early. Reservations were hard to get in busy seasons. So in 2002 the resort closed its doors for almost two years for a 110 million dollar, total remodel and expansion. During this time, Shades of Green’s guests were housed in Disney’s Contemporary Resort North Garden Wing (now replaced by the DVC Bay Lake Tower). This section of the Contemporary was turned over totally to Shades of Green. They set up their ticket sales office and gift shop in some of the guest rooms.

This was a fantastic opportunity, military families were able to stay in a Disney Deluxe resort for Shades of Green prices.

The aim of the renovation was to create an even better resort that included more guest room options, meeting space, additional dining locations, and more guest amenities. The renovation remodeled the guest rooms in the Magnolia Wing, doubled the number of guest rooms with the addition of the Palm Wing, and added ten family suites. Additional restaurants were added as well as 7,500 square feet of meeting facilities, a fitness center and a multi-level, 500 space parking garage.

The resort reopened in March 2004 with a total of 586 guest rooms, a new Italian restaurant, guest gym, as well as roomier ticket sales and gift shop areas. Over the years several major and minor renovation projects have taken place to refresh the guest rooms and update the pools and restaurants. In recent years with Disney offering the Disney Armed Forces Salute, Shades of Green has had to innovate and has offered many varied discounts to military members in order to keep their rooms filled to the desired capacity. As Disney’s Armed Forces Salute, offers steeply discounted resort rooms.

Shades of Green is so popular that in fiscal 2017 (most recent available) they maintained a 92% occupancy rate, taking in 42.5 million dollars, 27.1 million of which came from room revenue, the rest being food and beverage, services, and parking fees.

Shades of Green closed for the second time on 17 March through 13 August 2020 due to the national reaction to the covid virus. Upon reopening all previously published discounts were cancelled. To learn more about the great Shades of Green Resort see these other pages: