Do you want to know if you qualify for Disney Military Discounts?

Do you want to know if you have the right ID?

There are 3 different sets of Disney Military Discounts that we’ll discuss here. Each has its own eligibility and ID rules. These are:

The Disney Armed Forces Salute is the most restrictive.

Those eligible member s are:

Unremarried Widows are entitled to their departed spouse’s discounts (not Civil Service or Contractor).

Foreign partners/Coalition partners stationed at a US base are eligible. They must have a permanent US Military issued ID (CAC card with blue stripe).

Below is a chart showing the IDs that Disney accepts for the Disney Armed Forces Salute. This can also be used to determine eligibility for purchasing WDW’s special Party Tickets (Halloween and Christmas), 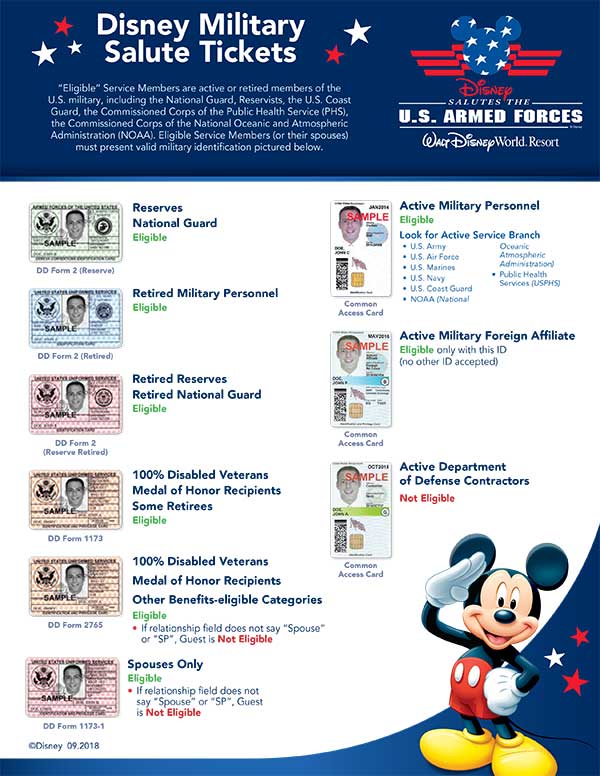 100% total and permanently service connected disabled? Need to get your military ID? Read This

All those mentioned above are eligible to use Base Ticket Offices, plus starting in 2020, the John McCain Defense Authorization Act or as it’s also known the Purple Heart and Disabled Veteran Equal Access Act took effect. This opens up eligibility for the use of Base Ticket Offices and many other MWR functions to:

The IDs required to prove eligibility are:

The HEC form H623A will be accepted in lieu of VHIC for veterans who have been placed in VA’s healthcare priority group 8E.

The VHIC must display the Veteran’s eligibility status (i.e., PURPLE HEART, FORMER POW, or SERVICE CONNECTED).  Note:  VHIC cards are issued to veterans enrolled in VA health care. Visit: https://www.va.gov/healthbenefits/vhic/ for information regarding eligibility for the VHIC and the application process.

The Shades of Green Resort

Shades of Green is the Armed Forces Recreation Center located right on Walt Disney World property. The 2 eligibility categories discussed above are eligible, plus quite a few more:

The required IDs for these eligibilities are:

Our Other Info for Non-Retired Veterans

I hope that this guide helps you navigate this confusing subject!

Let us know if you have questions below in the comments section.