Walt Disney World is one of the greatest vacation destinations not only because of the magic, but also because there is so much for the entire family to do together, regardless of age.

Of course all Disney shows have no age or height requirement, but some people are really at the most magical place on earth for the rides! We’re here to share with you 25 Disney World rides with no height requirements, so that means yes, even the baby can ride!

Did you know that this 2020 ride is the first attraction in any Disney park that is Mickey Mouse themed? It all started with a mouse… hmmm. Anyway! This is a trackless ride that drops you into the cartoon. Everyone will enjoy the colors, music, and  amazing technology. 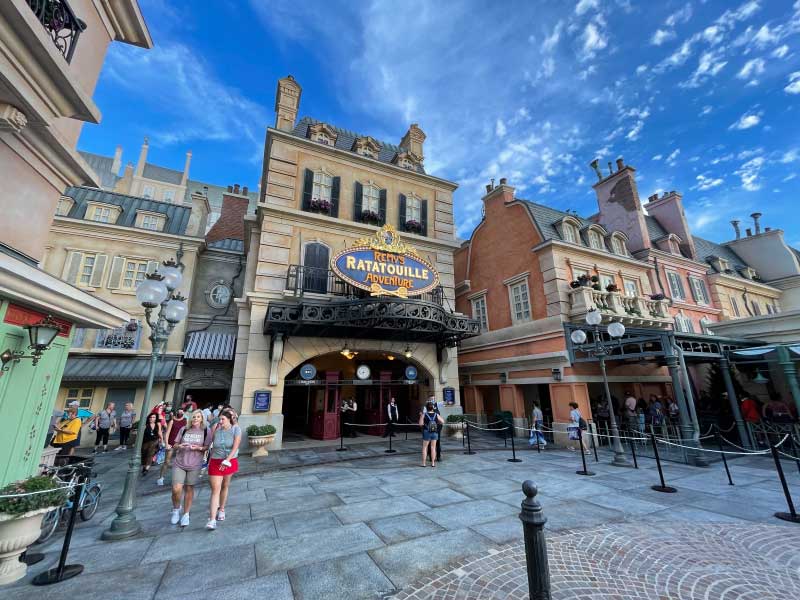 Just like Mickey and Minnie’s Runaway Railway, Remy’s Ratatouille Adventure is a trackless ride that shrinks you down to be part of the story. Located in the France pavilion in EPCOT, this family ride is exactly what this park needed! Keep an eye out for details around the outside of the building! Imagineers had a lot of fun with Pixar easter eggs over here.

Toy Story Mania is a fun 3D shooting carnival game where you pull a ball on a string and aim at moving targets! Toy Story Land is one of Walt Disney World’s most detailed themed lands. The whole family can look around and try to find all of the details!

Located in the Magic Kingdom, Buzz Lightyear Space Ranger Spin is also a competitive shooting game, but this time, you are Buzz Lightyear’s video game! Remember the game that Rex is obsessed with in Toy Story 2? Now you’ll be the one to help to defeat Zurg!

The classic Peter Pan’s Flight is a lovely ship flying high over London and Neverland, with the help of some pixie dust and Disney magic. The entire family will feel nostalgic with this attraction.

6. Pirates of the Caribbean

Yo ho, yo ho, a pirate’s life for… everybody! Loaded with animatronics and action, this classic Disney boat ride is perfect for the entire family! Keep an eye out for the cagey Captain Jack Sparrow! Make it a family game, who can spot him!

Don’t let the name fool you! Unless you have especially skittish members of the family, that is. These 999 happy haunts are fun for everyone to see in this attraction. The macabre decor paired with happy music is the perfect balance of spooky and innocent fun. These grim grinning ghosts just come out to socialize!

You may not be able to load up the whole family to go to Africa, but you can see an authentic African safari right here in Walt Disney World. Watch the giraffes running, the lion roar, and even be road blocked by a rhino! These are real animals, not animatronics despite some odd rumors. Be sure to go first thing in the morning or right after a rain! The animals like the cooler weather and you might see more activity! 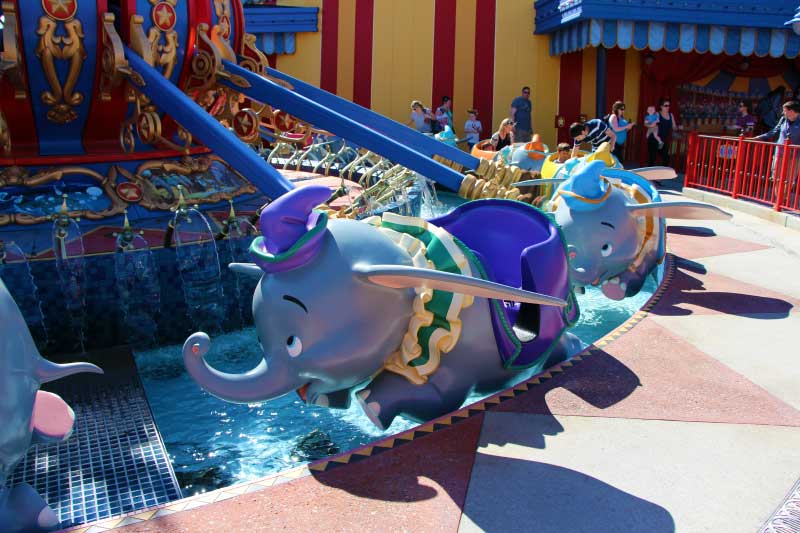 Get ready to make memories! You can create a generational legacy with Dumbo. Not only is it an opening day attraction to both US Disney parks, it has also been one of the most iconic attractions in Disney history! You are never too old to board a dumbo and take off. Plus! Don’t worry about getting the perfect picture or having someone miss out just to take pictures. There is a Dumbo photo prop so the whole family can get the perfect picture!

Astro Orbiter is the same ride system as Dumbo, but you actually have to take an elevator to get in line. This attraction is high above Tomorrowland in the Magic Kingdom. The best time to ride Astro Orbiter is when the sun goes down and Magic Kingdom is all lit up. If your timing is perfect, you can watch part of the fireworks show from the sky!

Come on, fam! Get ready to belt it out! Don’t lie, you know the song… “Let it go! Let it go and I’ll rise like the break of dawn!”  Some of the most technologically advanced animatronics are in Frozen Ever After, so even if some family doesn’t care much for the movie, they will enjoy the imagineering.

Do you trust your family to not go crazy spinning the tea cup? Trust gets tested on the Mad Tea Party. One minute you are delicately spinning in Fantasyland, next thing you know, that one person in your family starts going nuts spinning the disk! (You could say I have trust issues from this ride!) Though there are no height restrictions for the Mad Tea Party, we don’t recommend it for pregnant women.

You know you love the song, now the whole family can join along! It’s the song that will get in your head and never leave, and isn’t that the start of a memory! Everyone complains about it, but they secretly love it. How could you not!

Are there any jokes better than dad jokes? The world famous Jungle Cruise will take you along the Rivers of the World teaching you about the animals and tickling your funny bone the whole time with the world’s worst (best) dad jokes.

15. Journey into Imagination with Figment

With a spark of imagination you will see that this attraction is great for everyone to experience! Ok, yes, it’s dorky, but it’s an EPCOT classic. The mascot, Figment, has become a bit of a celebrity in the last few years. Grab your Figment popcorn bucket and have fun on this ride!

16. Living with the Land

There’s no better way to teach your kids about where their food comes from than the Living with the Land attraction! This slow boat ride takes you through different types of modern farming that utilizes less space and less water. It’s not well known that Walt Disney World actually grows a large amount of food that it serves!

Na’vi River Journey should win the prize for the most relaxing ride in Walt Disney World, but it is also at the top of the list for most beautiful, and the most amazing animatronic. Get lost in the world of Pandora with the sights, sounds, and even the smells.

18. Under the Sea ~ Journey of The Little Mermaid

The whole family will love the story of The Little Mermaid done in 2 minutes with the music that you love. Look out! The giant Ursula is up ahead! This is an omnimover attraction, meaning that the cars don’t stop moving, and that means the line goes through quickly.

19. The Seas with Nemo and Friends

Just like Under the Sea ~ Journey of The Little Mermaid, The Seas with Nemo and Friends is an omnimover attraction, so the line moves quickly. It is also another under the sea attraction! You can see the story of Nemo

Spaceship Earth travels through time to see the evolution of communication. This ride is not the most exciting ride in EPCOT, but it is the most iconic because it is inside of the “giant golf ball”. Spaceship Earth reminds you to thank the Phoenecians!

Walt Disney’s original dream for EPCOT was for it to be a functional city where people actually lived, worked, and played. The concept of a clean green mass public transportation system was part of that dream. The Tomorrowland Transit Authority PeopleMover is the product of that dream. This transportation system runs from the clever use of magnets to stop and go, and runs around the upper areas of Tomorrowland in the Magic Kingdom. For hardcore Disney history fans, the original model for EPCOT is seen while on the ride.

Magic Carpets of Aladdin is the “Dumbo” of Adventureland in the Magic Kingdom. This may not be a “must do” on everyone’s list, but we think this ride is a great use of time while waiting for our Dole Whip order at Aloha Isle!

Dinoland USA is becoming a bit of a ghost town over in the Animal Kingdom, but Triceratop Spin still remains! This is the “Dumbo” of Animal Kingdom, and is a great family ride in a park with not many family-style rides. This may be just a chubby up and down dinosaur, but the young and young at heart love them .

Need a nice, low key break in the Magic Kingdom? The steamboat over in Liberty Square is a running attraction lasting about 20 minutes taking a leisurely ride around the river. There are lots of details to see on the boat, or benches to take a short little cat nap. We won’t judge!

We cannot wait until this attraction is open for rides again! Walt Disney was famous for his love of trains and railroads. He not only had his very own ride-on train in his backyard, but many people even speculated that he developed Disneyland just so he could have an even bigger train! (This is why every Disney park worldwide has a train!)  The Walt Disney World Railroad runs through the Magic Kingdom and has been closed for an extended refurbishment since 2018 to change the rail system in Tomorrowland to make way for Tron.

As you can see, there is so much to do in Walt Disney World for the entire family, young and old! Just think, we didn’t even mention the live shows, animatronic attractions, parades, nighttime spectaculars, and playgrounds through the parks!

There is no right or wrong age to go to Walt Disney World, you have to do what is right for your family, but Disney makes it possible and magical for all members of the family.