This back entrance to EPCOT is located between EPCOT’s United Kingdom Pavilion and France Pavilion in the World Showcase, it is so convenient for guests staying at Epcot’s Resort Area.

The International Gateway has all of the same features and conveniences that you’ll find at the the EPCOT Main Entrance, but they are much less busy!

The International Gateway opened in 1990 as a park entrance for those staying in the Disney Resorts around Crescent Lake, collectively known as the EPCOT Resort Area.

The International Gateway sits between the EPCOT Resort Area and EPCOT’s World Showcase.

For those guests who choose to walk to the International Gateway from their resort, it takes about 15-20 minutes from the Swan & Dolphin and 10-15 minutes from the Boardwalk, Yacht, and Beach Resorts. Part of the Beach Club is just 5 minutes away!

Also Disney’s Friendship Boats will transport you from docks at the BoardWalk, Yacht Club, and between the Swan and Dolphin to the EPCOT International Gateway and Disney’s Hollywood Studios.

At the International Gateway you’ll find:

The International Gateway is a Transportation Hub

As I mentioned earlier Disney’s Friendship Boats have a dock here the boats that serve the EPCOT Resort Area and Disney’s Hollywood Studios. The waterway they travel on starts to the south at Hollywood Studios, runs north to the Swan and dolphin entering Crescent lake there and them runs from the lake east to the International Gateway and then into World Showcase Lagoon.

The boat dock is just past the skyliner station on your right and has a large green awning to wait under to get away from the sun and rain.

The restrooms are the first part of the building that you’ll come to. These are great Restrooms! they are some of the least used and cleanest ones on property.

You can make a pit-stop prior to entering the park or after exiting.

Adjacent to the restrooms a limited number of lockers can be rented. There are quite a few, but it’s small by comparison to the main entrance.

Next in the building, you’ll come to the Ticket Windows and Guest Relations location.

At Guest Relations you can do all of the above as well as deal with any concern that you might have.

The International Gateway has your standard Disney Security Checkpoint. You come to it after passing the Skyliner Station and Boat dock.

This checkpoint handles traffic walking from the EPCOT Resorts, the Friendship boats, and Skyliner Station. But wait times are never very long.

Security Cast Members will get you right through as quickly as possible.

See my Disney Security Primer for more info and tips on security.

Each touch point has 2 Mickey heads on each side. If the person in front of you stops to use the first one (a bad natural habit), step around them if you can and use the second to keep the line moving. 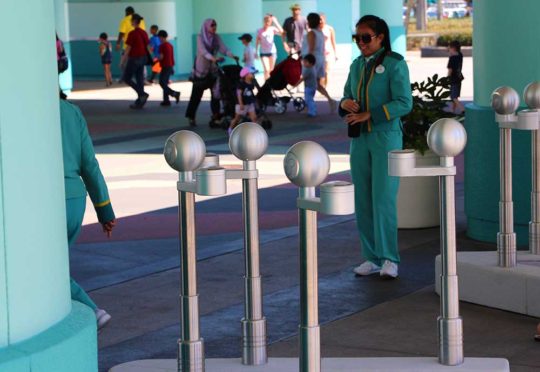 After passing through the entrance you’ll be in Epcot, but still in the International Gateway area.

Here you’ll see that the Gateway still has a little more to offer.

Walt Disney World is still inexplicably using the attendance limiting measures they started to control physical distancing right after the 2020 shutdown. As far as park hopping, these measures do not allow you to park hop until 2 p.m. Before the shutdown you could park-hop at any time.

At Disney World You can actually get in a little earlier than 2 in many situations!

At WDW they turn on Park Hopping in the system at 1:45 and it takes a couple minutes to take effect. I was told by a entry supervisor that the system is ready for park hopping by 1:47. I have successfully entered at 1:47 multiple times

The exception to the 1:47 entry is Epcot’s International gateway. Here, they hold Park Hoppers behind a temporary barrier prior to security until 2 p.m.

You can however go off to the building to the left to “use the bathroom” or “rent a locker” then walk over to security and then the entrance at any time, say at 1:47…

In the pic above the red line shows where they set up a temporary barrier to keep the 15 people waiting to park hop at 2 p.m. away from the area between Security (the left awning ) and the entrance (the right awning) so there won’t be congestion. The white arrows show the path to the restrooms and then through security to the gate (to be used at 1:47 (no earlier).

In the Security Checkpoint pic a couple above where the folded umbrellas are is where they hold you until 2 p.m.

The World Traveler Gift Shop is the Gateway’s merchandise shop. It’s on the smaller size but offers a nice variety of Disney and EPCOT merch. It’s one of the very few spots where you can find Skyliner clothing and merch.

Outside the World Traveler you’ll also be able to rent strollers, wheelchairs, and scooters from the kiosk.

just past the World Traveler Gift Shop the pathway goes up a short hill to meet the promenade around the World Showcase. The UK will be to the left and France tot he right.

Be sure to check out the great view of the France Pavilion to the right as you head up the hill. It’s s great spot for a pic!

As I mentioned above the International Gateway opened on 12 January 1990 as part of Disney World’s early 90s hotel expansion under CEO Michael Eisner.

The EPCOT area Resorts and their opening dates.

Over the years the International Gateway has changed just a little.

The Skyliner Station itself began construction in 2018 and it was opened at the very end of 2019.

France from the EPCOT International Gateway

I hope that you’ve enjoyed this intro to EPCOT’s International Gateway! I had fun putting it together.

Let me know if you have any questions or comments in the Comments Section below!